Located in Panama NY, this private park is a wonder of New York. The rock formations are millions of years old.


416 million years old to be precise. At that time, America was a part of the Euramerica supercontinent and was rotated 90 degrees so that the north of Canada was facing east and Mexico was in the west. Euramerica was located on the equator and a vast sea covered the continent from Utah in the west to deep into what would become Southern Canada in the east. The formation called Panama Rocks was a shoreline of a rocky island in the southern reaches of this inland sea.
Plants (and fish) dominated the Earth in this era, to the point where plants completely changed the CO2 and O2 levels, resulting in an Ice Age. Euramerica drifted north and westward and the sea dried up. Drifting east over millions of years, great upheavals and earthquakes lifted the shoreline to its current height of 1500+ feet over current sea levels. By the time of dinosaurs, Euramerica was no more. It had broken in two and formed the continents of Europe and North America, with Greenland in the middle.
Within the last 20,000 years, the last ice age ended leaving New York and Panama Rocks in their current state. What a wonder! 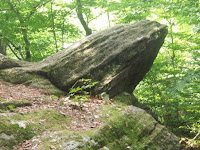 In modern times, the park has been in the ownership of several private groups. Approximately 100 years ago, the park was a Honeymoon getaway spot. After a period of inactivity in WWII, the park buildings and environs were renovated and improved by a series of owners. The most recent improvements occurred in 2011.
Posted by Phil Viverito at 3:53 PM

You can support me by via Paypal.me. This fund goes to defray the costs of web hosting and new equipment costs. You can also buy me a coffee at Ko-fi.

Phil Viverito
In 2001, Jennifer Kitty Viverito and I were married and we have three wonderful children: Nate, Paul and Cat. Yes, that spells out NPC. I love D&D and other tabletop games. I started a series of blogs on my main interests: Travel, art, the college experience, games, and technology. This year I decided to combine them all into These Old Games.